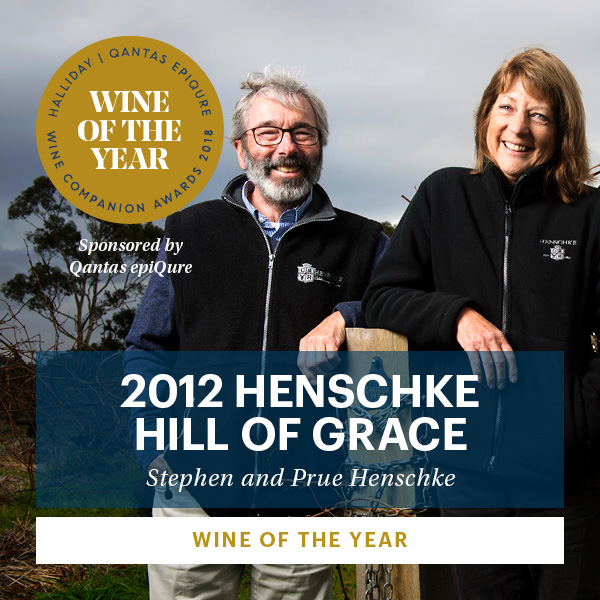 Fifth-generation winemaker, Stephen Henschke was thrilled with the result after only launching the exceptional 2012 vintage of Hill of Grace Shiraz on 1 May 2017.

“It is an absolute honour to receive these accolades. Hill of Grace vineyard is a special site. The vineyard is only made up of 4 hectares of shiraz ranging from 70 to over 150 year old vines. The wine really is history in the bottle,” said Stephen.

This award acknowledges Stephen’s pioneer ancestor Nicolaus Stanitzki who planted the vineyard in 1860 and his father Cyril, a pioneer of single-vineyard table wines, who produced the first vintage of Henschke Hill of Grace in 1958 when those original vines were already almost 100 years old.

Henschke Hill of Grace is the most celebrated of the wines crafted by Stephen and Prue Henschke.

Every vintage from the revered single-vineyard Hill of Grace is a limited release, but some are more limited than others. Just one barrel was produced in 2003 with extremely tiny vintages for 2013 and 2014. There was no Henschke Hill of Grace made in 1960, 1974, 2000 and 2011.

“My viticulturist wife Prue has done incredible work in this vineyard, looking after such old vines with organic and biodynamic principles. Her work is already showing huge benefits in soil health and moisture retention for these pre-phylloxera, dry-grown sentinels. Hill of Grace Shiraz is a reflection of the wonderful flavours and balance this site can achieve, and the separate parcels are ‘nursed’ in the winery using very gentle, traditional open-top fermentation techniques.”

The awards are based on the reviews in the 2018 Halliday Wine Companion book, published by Hardie Grant in paperback and on sale nationwide from Thursday, 3 September.

Stephen and Prue were delighted to find an additional 38 wines from their portfolio reviewed in the 2018 Halliday Wine Companion, with no wine being scored below 90 points.

“It’s fantastic to see Hill of Roses 2010 and Mount Edelstone 2014, wines that have shaped the Henschke story, so high up on the list,” Stephen remarked.

An extended profile of Stephen and Prue Henschke will feature in the next issue of Halliday Wine Companion magazine, on newsstands from early September. winecompanion.com.au