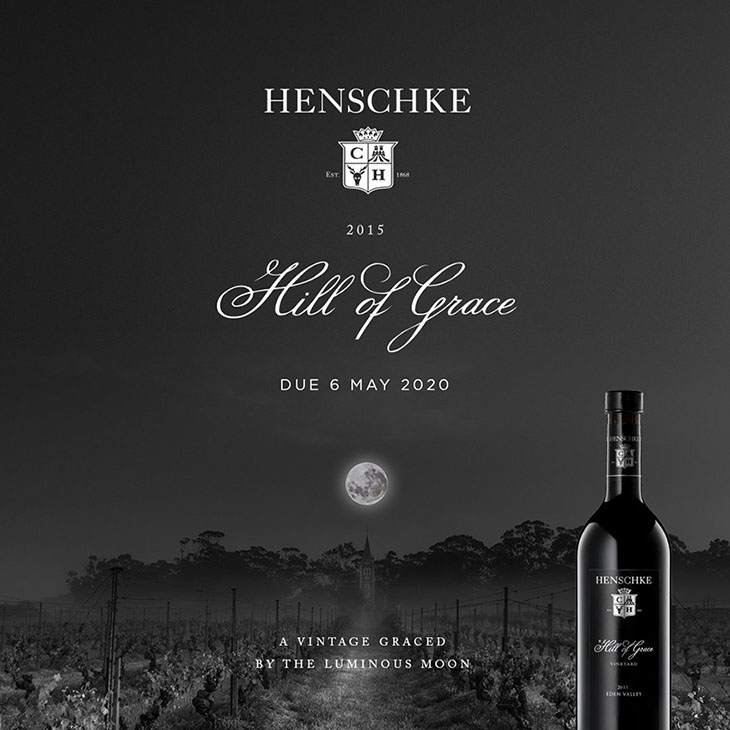 The 2015 vintage of Australia’s most revered single-vineyard wine, Henschke Hill of Grace Shiraz, will be released on Wednesday, 6 May 2020.

Henschke Hill of Grace is at once a profound and yet ethereal expression of a single Eden Valley vineyard, lying in a shallow alluvial valley just north-west of the Henschke winery. The name comes from the beautiful Gnadenberg Lutheran Church overlooking the vineyard; ‘Gnadenberg’ translating from German to ‘Hill of Grace’. Planted by Henschke ancestor Nicolaus Stanitzki around 1860, the oldest vines are now 160 years of age.

This 58th vintage (54th release) of Henschke Hill of Grace was handpicked from 17-26 March 2015; the final pick taking place a week before the harvest moon of Easter.

Harvesting close to the full moon is an optimal time, according to fifth-generation winemaker Stephen Henschke.

“As far back as ancient Greece, there are records noting the benefits of harvesting crops around the full moon. Prue and I researched the picking dates for Hill of Grace, going back many decades and found that most vintage dates – whether the fruit ripened early or late – occur close to the full moon after the autumn equinox (Easter). It’s a fascinating enigma of nature, as by the calendar, the date of Easter can vary by up to thirty-five days,” says Stephen.

“We like to visualise the grace of the harvest moon underlying the luminosity of the 2015 Hill of Grace with its purity of aromas, depth of flavour and silky lustrous tannins – a majesty and a mystery that takes our breath away with its grandeur.”

Viticulturist Prue Henschke, Stephen’s partner in life and business, has nurtured the venerable Hill of Grace vines for over thirty years. The vineyard is comprised of a number of different blocks, which contribute varying characters to the resulting wine. Just seven of these blocks, or half of the eight-hectare vineyard, are made up of shiraz. The oldest block, ‘The Grandfathers’, was planted around 1860. The other four hectares were planted to mataro, semillon and riesling.

“The principles of biodynamics and organics enable us to create the best environment for these old, gnarled, dry-grown vines. We have been able to improve soil health and water-holding capacity with a range of techniques. These techniques include using biodynamic compost to build up organic matter with an overlay of straw mulch under the vines. Native grasses are planted in between vine rows to protect soil structure without competing with the vines for precious water. Other native species enrich the ecosystem for beneficial insects to assist with pest management.”

Prue’s mass selection from Hill of Grace vineyard has been a valuable project to preserve the genetic origins of the best pre-phylloxera ‘ancient’ vines by planting a nursery vineyard to be maintained for future generations. The selected vines, known as ‘Post Office Block 3’, are still considered too young at 31 years of age to classify for Hill of Grace Shiraz. The fruit is made into a sibling wine, Hill of Roses Shiraz, that can be accessed through the Henschke website.

Hill of Grace Shiraz was created by fourth-generation winemaker Cyril Henschke in 1958, after the success of his first single-vineyard shiraz, Mount Edelstone 1952. Both wines express their unique stories of a season, a site and a family of winemakers.

The exceptional 2015 vintage provided good yields of stunningly elegant fruit, showing extraordinary flavour, purity and acid balance, with the potential for excellent ageing. The cool, high-altitude nights of the Eden Valley allowed the shiraz fruit to slowly ripen and mature, and retain natural acidity for longevity. The warmth of the sunlight has built astounding layers of fragrance and flavour; also the secret of the fine, velvety tannins that lie within the skins of the berries.

Henschke Hill of Grace is made from 100 percent hand-picked, ‘old-vine’ shiraz. The 2015 vintage was vinified in traditional Henschke open-top fermenters and matured in 86 percent French and 14 percent American (one-third new, two-thirds seasoned) oak hogsheads for 18 months prior to blending and bottling on-site. Stephen describes the resulting wine as “intensely concentrated, with plum, blackberry, anise and signature five spice flavours, while enchantingly elegant and refined in its structure”. With ideal cellaring, Henschke Hill of Grace 2015 can be confidentially matured for 30+ years.

In years when the season delivers exceptional semillon fruit from a small half-hectare block planted on the Hill of Grace vineyard in 1952, the family also produce the rare Henschke Hill of Peace Semillon. Aged for five years on release, with ideal cellaring this wine can confidentially be matured for 20+ years. Henschke Hill of Peace Semillon 2015 will also be released on the Henschke website from the same date.

Australians will be able to access Henschke Hill of Grace 2015 on Henschke.com.au and through a selection of fine wine retailers from Wednesday, 6 May 2020.