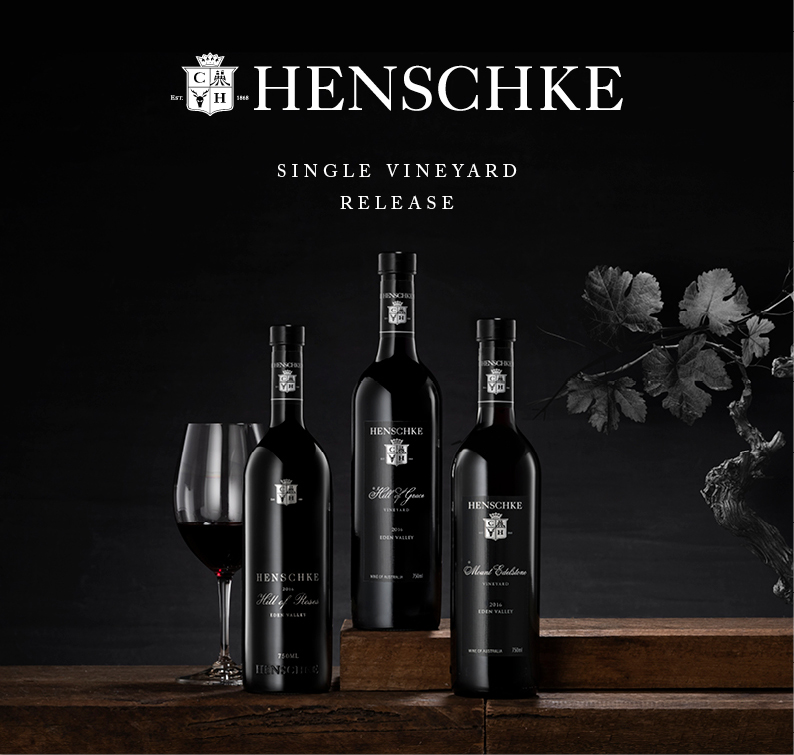 The 2016 vintage of one of Australia’s most distinguished wines, Henschke Hill of Grace Shiraz, will be released globally on Wednesday, 5 May 2021.

In celebration of their custodianship of two ancient, single vineyards nestled in the Barossa’s Eden Valley and the exceptional 2016 vintage, the Henschke family will release Mount Edelstone Shiraz 2016 alongside Hill of Grace.

Mount Edelstone was first produced in 1952 by fourth-generation winemaker Cyril Henschke, one of Australia’s leading pioneers of dry table wines, from 16 hectares of shiraz planted in 1912 by Ronald Angas, descendant of English landowner George Fife Angas. This is the 64th release and arguably Australia’s longest, consecutively-produced single-vineyard wine. The success of Mount Edelstone gave Cyril the conviction to release his second single-vineyard, single-varietal wine, Hill of Grace in 1958, from vines that were almost 100 years old.

Henschke Hill of Grace is at once a profound and yet ethereal expression of a single Eden Valley site, lying in a shallow alluvial valley just north-west of the Henschke winery. The name comes from the beautiful Gnadenberg Lutheran Church overlooking the ancient vineyard, where a congregation gathers weekly; ‘Gnadenberg’ translating from German to ‘Hill of Grace’. The oldest vines, known as the ‘Grandfathers’, were planted circa 1860 by Nicolaus Stanitzki from pre-phylloxera material brought from Europe, and are estimated to be just over 160 years of age.

As Henschke winemaker for four decades, Stephen Henschke now walks these ancient vines with his wife Prue, one of Australia’s most talented and dedicated botanically trained viticulturists. Her vision means the vines, managed with organic and biodynamic practices grow within the native landscape; an ecosystem of local grasses and flowering plants. “My philosophy is a holistic one; to ensure that the created environment sits in a healthy balance with the natural environment,” says Prue. This is the 59th vintage (55th release) of Henschke Hill of Grace. Every vintage from the single vineyard is a limited release, however some are more limited than others. There was no Hill of Grace made in 1960, 1974 and 2000. Just one barrel was produced in 2003; no vintage in 2011 and extremely tiny vintages for 2013, 2014, 2019 and 2020.

The 2016 vintage will be recognised for deeply coloured, plush , dark-fruited wines, which are concentrated, complex, vibrant and energetic, with beautifully layered mature tannins; overall characterised by average yields of small berries and exceptionally high quality”

They are very much akin to high-quality vintages such as 1988, 1994 and 2008, all of which were picked on early Easters and have shown exceptional ageing potential in ideal cellaring conditions

A sibling wine to Hill of Grace; Hill of Roses Shiraz 2016, a young-vine wine produced from a mass selection of the best performing shiraz vines on the Hill of Grace vineyard, will also be released this May. Prue’s mass selection began in 1986 to preserve the genetic origins of the ancient Hill of Grace vines. The resulting nursery vineyard, known as ‘Post Office Block 3’, was planted in 1989 and will be maintained for future generations. The vines are still considered too young to classify for Hill of Grace (27 years of age in 2016), however have warranted their own separate release since the first bottling in 2001. The historic Parrot Hill Post Office ruins overlooking the Hill of Grace vineyard are on land that was previously Rosenzweig property; Rosenzweig translating from German to ‘rose twig’.

“Following the classically-styled 2015 vintage in the Eden Valley, dry and favourable weather in the 2016 vintage ensured excellent ripening. These wines are unmistakable in their origins and are destined for a long life

Henschke Hill of Grace 2016, Mount Edelstone 2016 and Hill of Roses 2016 will be available through fine wine retailers, restaurants and the Henschke website and cellar door from Wednesday, 5 May 2021.