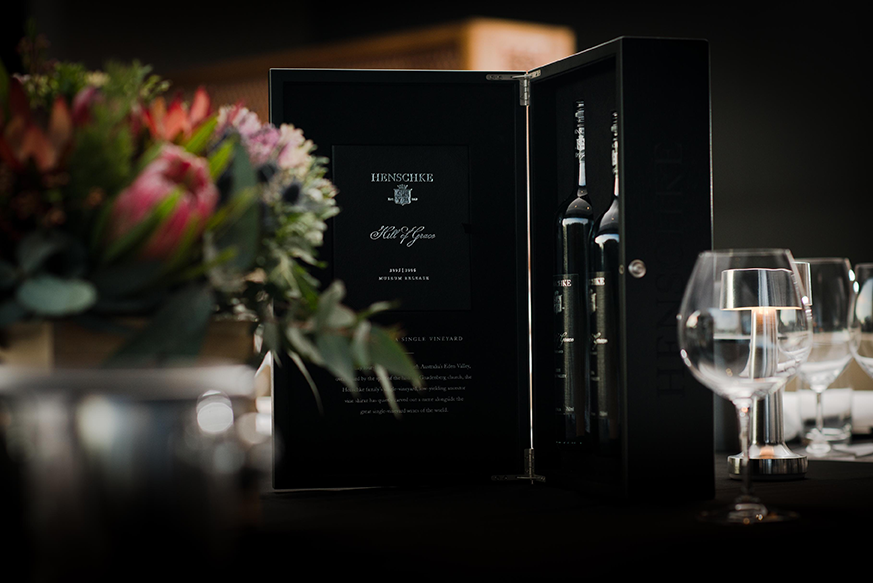 The 2005 and 2006 Henschke Hill of Grace, both rated by Stephen and Prue Henschke as exceptional vintages, have been re-released today, as a pair, in a custom-made wooden presentation box accompanied by a book of stories, history, tasting notes and technical information.

The ‘museum releases’ as they are known, tell the story of a unique single vineyard, two distinct seasons and a winemaking family.

From one of Australia’s oldest and most acclaimed single vineyards, Henschke Hill of Grace shiraz will always be limited. There were no releases for 1960, 1974, 2000 and 2011 due to unfavourable vintage conditions. One barrel was made in 2003. Extremely small releases are pending for 2013 and 2014.

The first Hill of Grace vines were planted in the 1860s. At the same time, a beautiful Lutheran church was built on land donated by the Henschke family. They named it Gnadenberg in tribute to their homeland. The vineyard overlooked by its spire, took on the same name, which in English translates as ‘Hill of Grace’.

Every bottle of Hill of Grace is individually numbered for traceability to guarantee its authenticity and provenance. The 2005 and 2006 have been kept aside in the family cellars in perfect cellaring conditions for lovers of back-vintage wines.

“One of the great pleasures of keeping back small components of special vintages is discovering how they age over time. Hill of Grace is one of the oldest single-vineyard wines today which still recognises the first moment of its creation; the same unique site, dream and desire for integrity and excellence. Now over a decade old, the wines have been left undisturbed since we bottled them eight and nine years ago, respectively,” says Stephen.

“Opening these wines now, brings much to reflect on the 2005 and 2006 vintages; both showing wonderful structure, longevity, balance and character.”

Stephen’s father Cyril, fourth-generation, began the museum program in the 1970s, after developing great relationships with the restaurant trade and discovering their fascination for mature wines. In exceptional vintages, Cyril kept back a pallet or two of Hill of Grace and Mount Edelstone to age, something that Stephen has continued since.

“The museum means any of the vintages held back over time will have unquestioned provenance, giving these wines a special quality: a guarantee they will never have left the place where they were made and bottled, and stored under optimal conditions in the museum,” comments James Halliday in the book’s foreword.

“The release is extremely limited. This mini-vertical provides wine lovers with either a starting point for their cellars, or an opportunity to build on their Hill of Grace collection,” explains Stephen.

The wines are available from today at selected fine wine retailers and restaurants Australia-wide as well as the Henschke Cellar Door and website.

The Henschke family has been making wine since Johann Christian Henschke planted his first vineyard in the Barossa’s Eden Valley in the early 1860s. Today, fifth-generation winemaker Stephen Henschke and his viticulturist wife Prue are recognised around the world for their exceptional quality wines, innovation and sustainability in the vineyard. To preserve the genetic heritage of their oldest vines they have implemented an inspiring nursery program, and they lead the way with organic and biodynamic practices. They are mindful of their role as custodians of the land and their need to nurture it for future generations.

For more information, visit the Henschke website at www.henschke.com.au

Henschke is a proud founding member of Australia’s First Families of Wine.

Henschke Hill of Grace was awarded a Barossa Trust Mark in 2014.