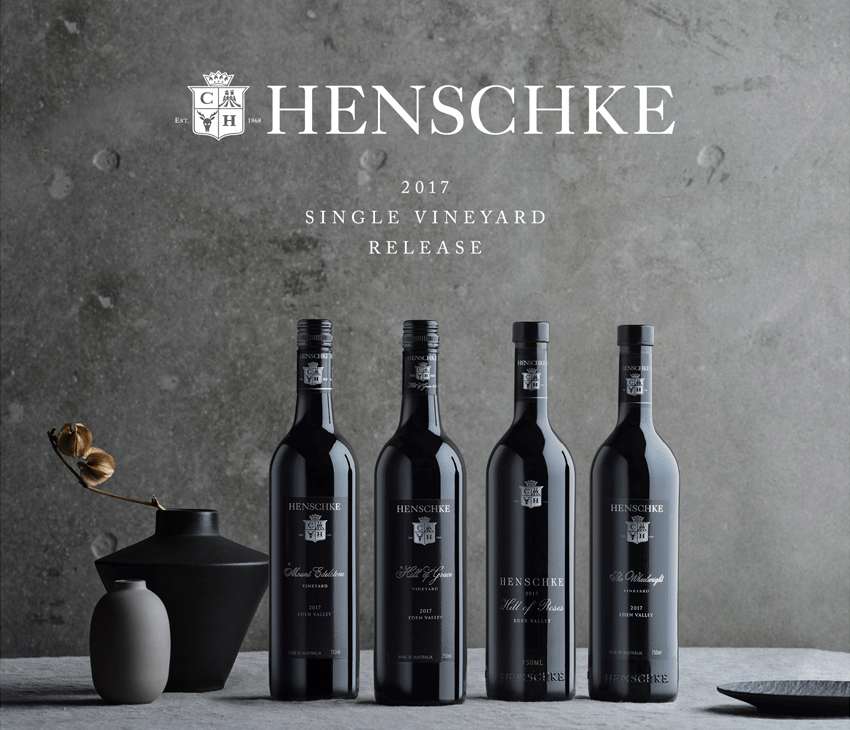 Today marks the global release of the exceptional 2017 vintage of Henschke single-vineyard shiraz wines from the Eden Valley: Hill of Grace, Hill of Roses, Mount Edelstone and The Wheelwright.

The 2017 Single Vineyard Release shares the story of one season and four single sites under the custodianship of this sixth-generation winemaking family.

The release follows the vision of fourth-generation winemaker Cyril Henschke, one of Australia’s leading pioneers of dry table wines in the 1950s, who produced his first single-vineyard wine Mount Edelstone in 1952 from 16 hectares of shiraz planted in 1912 by Ronald Angas. This is the 65th release of Mount Edelstone Shiraz and arguably Australia’s longest consecutively produced single-site wine.

The 1956 vintage and subsequent releases of Mount Edelstone achieved national wine show success, giving Cyril the conviction to produce his second single-vineyard shiraz, Hill of Grace, from a tiny, family-owned vineyard growing in a shallow, alluvial valley, just four kilometres north-west of his winery. These pre-phylloxera vines brought from Europe were planted around 1860 by Nicolaus Stanitzki.

“2017 is a vintage graced by vitality,” says Stephen Henschke, fifth-generation winemaker. “The common thread through all four Eden Valley releases shows a liveliness and capacity for long life that has developed as the result of an exceptionally long and gentle growing season. This vintage will be recognised for wines of incredible depth, purity and energy, much akin to high-quality vintages such as 1992, 2006 and 2012, all of which were late, cool seasons and have shown excellent ageing potential in ideal cellaring conditions.”

The Wheelwright Shiraz expands on Cyril’s legacy and his belief in the outstanding quality of Eden Valley shiraz. On the winery’s Centenary in 1968, Cyril planted a small shiraz vineyard in the cooler part of the Mount Lofty Ranges, in the central Eden Valley. It first became a source of shiraz for Cyril’s ‘Claret’ style wines, however decades of patience have allowed these vines to develop their own fascinating character and complexity. As the vines approached 50 years of age, Stephen and Prue captured the first snapshot of this distinctive single vineyard in the 2015 vintage of The Wheelwright, which was released in 2018 to commemorate 150 years of family winemaking. The 2017 vintage is the third release of this wine.

Stephen took over the winemaking reins from Cyril in 1979 and has now been chief winemaker for four decades.

“Our unique Eden Valley sites mean so much more to me than the beauty of the vines and the wines they produce. Each step we take is in the footsteps of our ancestors. Our story is the perseverance and courage of the generations past and the generations yet to come,” he reflects.

Stephen, and his wife Prue, one of Australia’s most talented and dedicated botanically trained viticulturists, have worked hard to protect the future of this legacy. Their initiatives include a mass selection program begun by Prue in 1986 to identify the best performing Hill of Grace vines for propagation. A new wine, Hill of Roses Shiraz, was created from this nursery of top selections in the 2001 vintage and takes its name from the Rosenzweig family who once ran the historic Parrot Hill Post Office that lies opposite. Rosenzweig translates from German to ‘rose twig’.

By increasing native diversity in the Henschke vineyards, with grasses and flowering plants, Prue has created a stronger, more balanced ecosystem than the vine monoculture of the past.

“My philosophy is a holistic one; to ensure our created environment sits in a healthy balance with our natural landscape. I would like to see the next generation inherit a fertile and sustainable land. Using the principles of organics and biodynamics over the past three decades has enabled me to create the best environment for plant growth. Since I started using these practices, I am seeing the benefits in greater expression of aromas and textures in the wines,” says Prue.

Henschke Hill of Grace 2017, Hill of Roses 2017, Mount Edelstone 2017 and The Wheelwright 2017 are now available from fine wine retailers, restaurants and the Henschke website and cellar door.