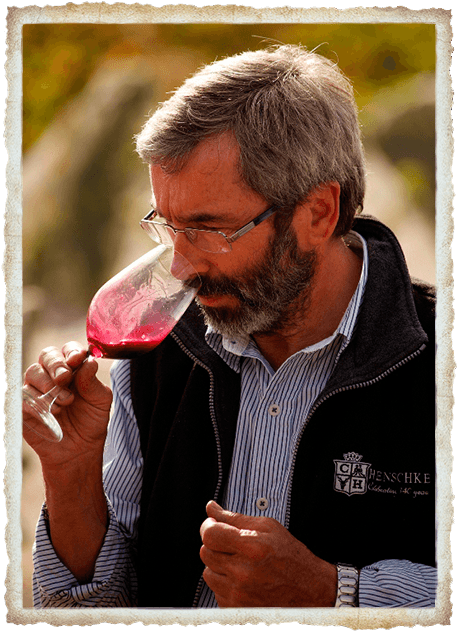 Fifth-generation Stephen Carl Henschke took over running the winery in 1979. Born in 1950, he was Cyril’s younger son and showed an interest in science and winemaking from an early age.

Stephen completed a Bachelor of Science Degree at Adelaide University in 1973, gained winemaking experience in the Hunter Valley, and in 1975 with his wife Prue, spent two years at the Geisenheim Institute of Viticulture and Wine Technology in West Germany. During their stay in Germany he undertook work experience in two wineries, Winzerverein Oberrotweil in Baden and the Institut für Rebenzüchtung und Rebenveredlung in Geisenheim.

On their return to Australia they enrolled in Wine Science at Charles Sturt University in Wagga Wagga, New South Wales, in order to catch up with the changes in the Australian wine industry. During this time Stephen worked with his father at the winery in Keyneton while Prue embarked on a career as a technical research officer at the nearby Roseworthy College.

n the early 1980s, Stephen introduced winemaking techniques learned in Germany and upgraded to more flexible refrigeration in the winery in order to improve the quality of the white wines. He maintained his ancestors’ traditional methods with his red wines, which focused on fruit quality and tannin maturity in the vineyard, submerged cap open fermentation, minimal racking, no fining and minimal filtration. He also began incorporating barrel fermentation as a component of his red fermentation techniques. Because of the poorly seasoned oak at the time he introduced an oak timber purchase program, seasoning it in the Barossa in order to obtain better quality mature oak flavours.

In the early 1980s, Stephen and Prue purchased an apple orchard at Lenswood in the cool-climate Adelaide Hills in order to pioneer viticultural and soil management techniques from Germany. This led to using Vertical Shoot Positioned canopies to improve fruit exposure and the old-vine selection programs in the 100-year-old shiraz vineyards.

In 1988 and 1989 they worked vintages in Burgundy and Bordeaux respectively, in order to research the grass roots level of viticulture and winemaking in those regions. With widened perspectives they have forged their own styles, with much of the success of Henschke wines attributed to the vine age and fruit quality in the vineyards. In 1994/95 the UK International Wine and Spirit Competition named them International Red Winemaker of the Year.

Stephen and Prue, with their three children Johann, Justine and Andreas, quietly continue a proud heritage and the philosophy for outstanding quality. They are mindful of the fact that more than 145 years of grapegrowing and winemaking, spanning six generations, has been an integral part of Australian quality wine history.