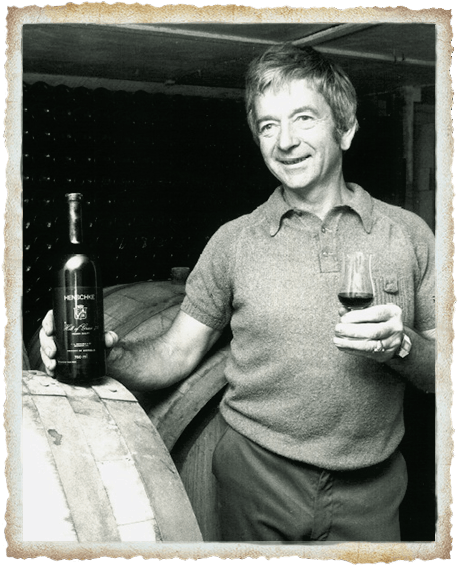 Cyril Alfred Henschke, born in 1924, was Paul Alfred’s youngest son. Even as a child it was evident that with his inquisitive mind and awareness of his surroundings he had the talent to become a winemaker, and on leaving Nuriootpa High School at 15 he worked for a year or two at Hardy’s Siegersdorf Winery to gain winemaking experience. This was at a time when winemaking had taken a back seat to farming due to the Great Depression of the 1930s, but Cyril’s interest in this area was absolute and the training he received help consolidate the finer points of winemaking he’d taught himself at the family winery. He married Doris Elvira Klemm in 1947 and they had three children – Paul, Stephen and Christine.

His father’s wine market had been largely fortifieds, but at home they drank unfortified wine. Cyril believed the region could produce fruit of suitable quality for dry table wines and he was keen to prove this was so. In 1949 with the help of his brother Louis, he added what are now the fermentation cellars, incorporating the old stable area into the winery. In about 1950 when Paul Alfred was into his 70s, Cyril took charge of the winery and began to experiment with the production of fine dry table wines, and began phasing out fortifieds in 1952. Although initially he experienced some difficulty in finding a market for his new wines, history vindicates his decision and acknowledges him as pioneering varietal table wines. He was the first person to make a dry white frontignac, for example, and he made dry semillon and riesling as separate wines when ‘varietals’ didn’t exist. He also experimented with ugni blanc and sercial.

By the mid-1950s Cyril was also recognised within the Australian wine industry as one who had identified that the quality of certain Eden Valley fruit, such as riesling and shiraz, was superior to that of the better known Barossa Valley. This decade of change from fortifieds also saw Cyril become one of the first to produce single-vineyard wines, and bring to the world those much-loved Henschke shiraz wines from Eden Valley – Hill of Grace and Mount Edelstone.

Cyril was the first Australian winemaker to be awarded a Churchill Fellowship and in 1970 undertook his study tour through many winemaking regions in Germany, California and South Africa. Another first was being a founding member of the Barons of Barossa, a wine fraternity that promotes the Barossa region.