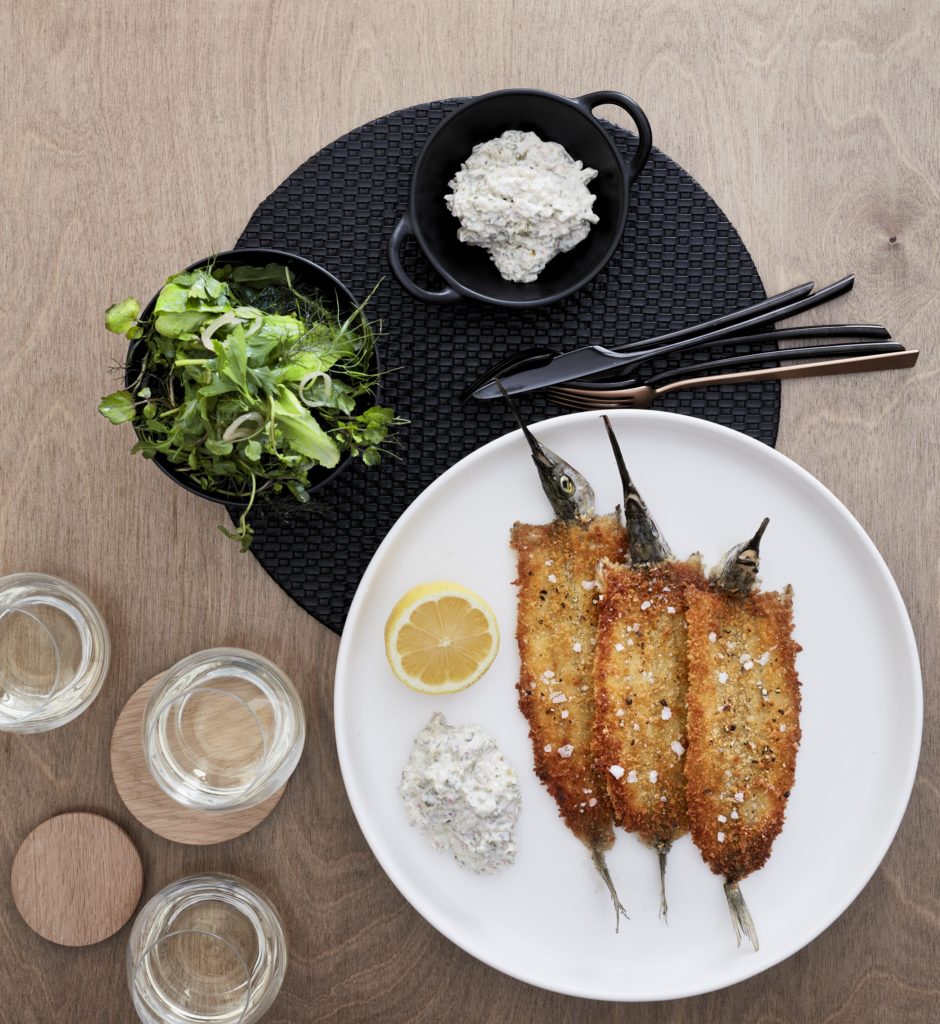 Assuming you’re right-handed (otherwise reverse these directions), place a fish on a chopping board with its head to your left and tail to your right. Using a filleting knife, cut down both sides of the collar and remove the head, pulling out the internal organs. Draw your knife down the backbone of the fish from the head to the tail, cutting along one side of the bone. Cut again to deepen the initial cut, carefully cutting all the way through to open up the fish, leaving the tail intact. Repeat on the other side of the backbone then, using kitchen scissors, snip out the backbone to give a kite-shaped fish fillet with the tail intact. Use fish tweezers to remove pin bones and rib bones, alternatively, depending on the species, it may be easier to remove rib-bones with a filleting knife.

Preheat oven to 100°C. Place flour in one bowl, egg in a second and breadcrumbs in a third. Holding it by the tail, dip one fish in flour, then egg, then breadcrumbs, pressing gently to coat it well. Place on a tray and repeat with remaining fish. Heat a third of the clarified butter in a large frying pan over a high heat. When hot, add two fish to the pan and fry for approx 2min until crisp and golden, then turn and cook the other side for a further minute or so, until also crisp and golden. Place on an oven tray. Keep warm in the oven. Melt half of the remaining butter and use to cook two more fish. Place in oven and repeat with remaining butter and fish.

Place all ingredients in a bowl. Stir to combine well. Set aside in fridge until needed.

Combine the sugar, salt and shallot. Set aside for 10min, then stir in oil and vinegar. Set aside. Combine parsley, dill, chervil, tarragon, watercress, rocket and lettuce. Toss with enough shallot dressing to lightly coat the leaves. Leftover shallot dressing can be refrigerated in an airtight container for up to one week.

To serve
Sprinkle fish liberally with salt and pepper and place in the centre of large warmed serving plates. Serve with lemon cheeks, generous spoonfuls of yoghurt tartare sauce and herb salad on the side.